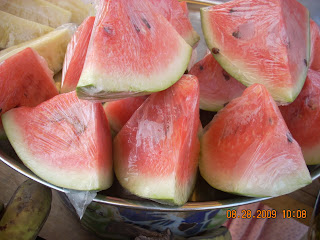 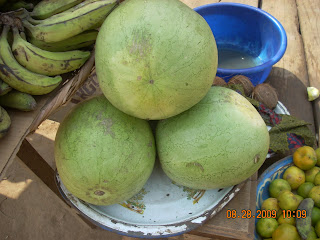 
The watermelon is a widely grown African vine [ Citrus vulgaris ] of the gourd family whose fruits are watermelons. Watermelons found in Lagos markets are usually green or striped green, sometimes 2ft or more long , oblong or roundish shaped fruits. They are also broad at the apex and generally glabrous.

The watermelon fruit has a sweet, watery, pink or red pulp with many seeds. It is reported that the flesh amounts to 65% of the whole fruit, and of this, 95% is water ; hence the name, watermelon!

The fruits come in handy during the dry and harmattan seasons, and constitute a valuable source of water. The flesh is usually eaten raw. In Lagos area, some indigenous people invoke the fruit in an incatation for the good delivery of a pregnant woman !

The watermelon is supposed to be an annual plant. However, massive cultivation of the plant in the south-western part of Nigeria in recent years makes watermelons available in our markets in large quantities. When they are in season , few fruits surpass watermelons in Lagos Area markets. The large density of population , a substantial part of them educated and informed, realize the nutritional importance of fruits, watermelons inclusive. They contain essential vitamins and minerals that are vital for good health and disease prevention.

Right now, there are no canning industries that package watermelons. But because the populace consume watermelons veraciously either by itself or in combination with other fruits like pawpaw and banana to form desserts, watermelons are never wasted after harvests. They sell quickly like hot cakes at the markets – whether wholesale or retail.

PHOTOS : Watermelons for sale at “Ketu Market” on wholesale and at “Iyana Ejigbo” market on retail basis.
Posted by S .O .DISU at 08:24