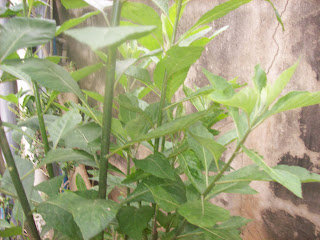 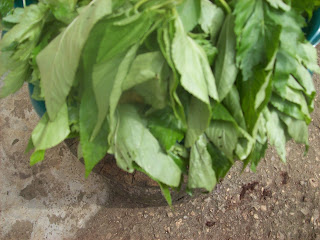 
The bitter leaf soup is a very important vegetable in our daily lives in Lagos State. Though it can be purchased in many of our markets all year round in Lagos area and beyond, the bitter leaf, because of its diverse uses, is found more in our gardens and homesthan in markets generally. Wherever it grows, it flourishes.

Its scientific name is "Vernonia amygdalina, Family Compositae"Its vernacular name is "ewuro"- meaning something bitter. During the rainy season, the "bitter leaf" plant grows so much foilage. There are several species-some large, leafy and deep green leaves, while some have comparatively smaller leaves. The leaves are very bitter. The bitterness is usually removed by boiling before the leaves are cooked as soups or added to soups made with other vegetables or eaten as spinach.

Generally, the Igbo speaking members of the populace use the bitter leaf mostly as a vegetable while the Yoruba 's use it more as medicine.

The leaves are also taken as an appetizer and digestive tonic. Furthermore, they are held to be anti-scorbutic. Bitter leaves are widely used for fevers and leaf decoction is usually taken as laxative among our local people. Traditionally, some women, immediately after childbirth may take a decoction of the leaves to affect their milk so as to act as a prophylactic against worms in the baby. Also traditionally, bitter leaves are rubbed on the brests for weaning infants.

The wood of the bitter leaf plant as well as the twigs are used as traditional chewing sticks and a tooth cleaner for some highly traditional members of the populace in Lagos State.

Because of the diverse usefulness of the bitter leaf, the plant is commonly grown as a hedge or compound fence. At times in homes with gardens and bitter leaf plants, bitter leaf seeds are used as aphrodisiac and the powdered seeds used as worm expeller.