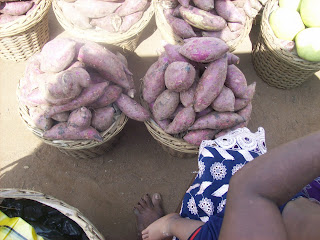 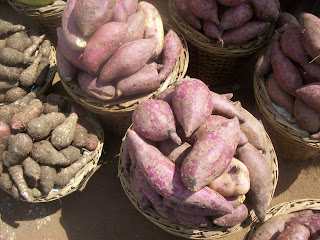 A very palatable and nutritious agricultural product that comes out during the latter part of the rainy season is the "lesser yam", loxally called "Odunkun" in the vernacular. It is biologically called "Dioscorea esculanta, Family Dioscoreaceae".
The lesser yam grows like the conventional yam-i.e climbing up to about twelve meters high on stakes. When matured, it has numerous shallow-rooted tubers. The tubers are relatively small compared with conventional yams, and they are found in clusters of some 5 to 20, slightly below the surface of the soil.
"Odunkun", the lessser yam, is cultivated around the coastal south of Nigeria, up to the Yoruba-speaking south-westhern part of the country. It is a 6-10 months crop with short dormancy period. Though the yield is high, the tubers do not store well; they are not suitable for transport to distant markets. The main advantage is that when cooked by boiling, the tubers are paslatable and nutritious!
PHOTO:
"Odunkun", the Lesser Yam", on sale at a rural market on the outskirts of Lagos State.
Posted by S .O .DISU at 05:41