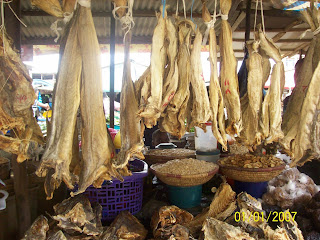 An important exotic food item commonly sold in major markets in Lagos Area is the stockfish. The stockfish is simply a type of fish (e.g. cod, hadlock, or hake) that is dried hard in the open air without salt. These types of fishes are commonly caught in Norwegian waters, very far away from our shores!
Stockfish trading is very thriving in the whole of southern Nigeria. This exotic delicacy is consumed more by people of south-eastern origin-i.e the Ibo's, than any other ethnic group in the state. Since there is a very large concentration of Ibo - speaking people in Lagos State, the stock-fish business is very thriving here, too.
Various types of vegetable-based soups are cooked with stockfish in addition to other condiments. Ibo-speaking peoples are voracious consumers of fresh vegetables and stockfish. Indeed, in all major markets in Lagos State, there are sections specially reserved for dried stockfish-trading.
As earlier mentioned, stockfish are native to Norwegian waters. They are caught in large numbers by means of modern fishing trawlers. These fishes are then cleaned out and dried, ready for export to West African nations, whose people cherish eating them in their soups!
Illustration:
Stockfish for sale at the "Iyana-Ejigbo" Market. Directly below the stockfish are displayed some of the condiments used with the stockfish in soup-cooking.
Posted by S .O .DISU at 04:49