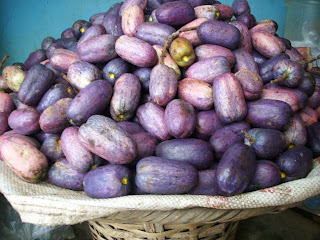 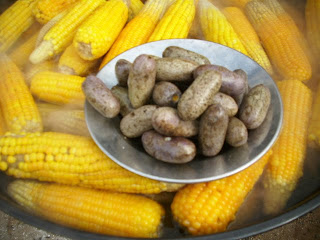 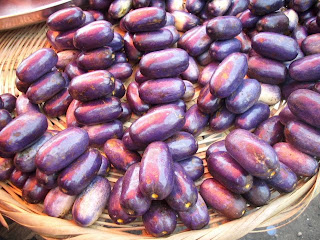 
The African Pear which is distinctly different in appearance, shape and size from the common pear is the fruit of a tree that flourishes in the evergreen forests of Southern Nigeria. This tree is typically planted for its shade and its fruit. Also, the bark of the African Pear tree is aromatic.

The African Pear is locally called "ube". It is botanically known as "Dascroides edulis, Family Burseraceae". It is an annual fruit. This fruit is about 7cm long and 3cm in diameter. It contains a leathery shelled stone surrounded by a pulpy pericarp about 5mm thick. This pericarp is butyraceous i.e. resembling or having the qualities of butter! It is this portion of the African Pear which is eaten, either raw or cooked to form a sort of "butter" The pulp is rich in oil and vitamins.

Interestingly, the annual harvesting of "ube" the African Pear, is concurrent with that of maize (or corn). Culturally, the appearance of 'ube" signifies that harvest time for field crops has arrived!People of South-Eastern Nigeria descent resident in lagos area cherish the consumption of the African Pear along with boiled corn.

People believe that the "resin" which is secreted by the African Pear is of medicinal value i.e it is useful in the treatment of parasitic skin diseases. Hence, the annual appearance of "ube" the African pear is extremely welcomed by several people in Lagos Area.

All whole sale markets in Lagos Metropolitan area e.g. the "Mile 12 Market" ,"Ketu Market" and "Iyana-Iba Market"are flooded with farm fresh African Pears when the harvesting is in full swing. Hordes of market women would be seen struggling to purchase them. From there, these traders transport them to various roadside urban and sub-urban markets. Needless to repeat, the African Pear does not appear for more than 4-6months in a year in our Lagos markets

(B) African Pear on sale at "Itire Market"