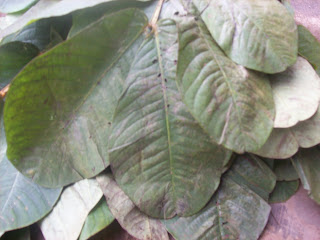 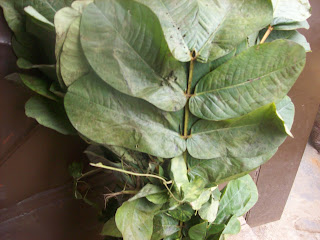 By S. Olanrewaju Disu
In addition to edible and very palatable vegetable food stuffs, Lagos area markets, especially on weekly market days are usually overflowing with highly medicinal agricultural herbs, tree barks, exotic leaves and sweet scented vegetables. One of these is the leaf called "ewe asunwon". It is botanically known as "Senna alata, Family Leguminosae, Caesalpinioideae". Its various English names are "the ring worm bush", "the ring worm shrub" and "craw-craw plant". This plant is useful in diverse ways.
It is a soft wooded shrub that reaches a height of two to five metres. It has bright yellow flowers and thrives in the forest zone of tropical West Africa. Historically, it is a native of tropical America. The plant is highly decorative and worthy of cultivation because of this and its other attributes.
Traditionally, a root decoction of the plant is taken to regulate menstrual flow among our local women. Also, the decoction with rock salt and some other dry plants are taken locally three times a week on an empty stomach as an effective treatment for chronic gonorrhea. The Ibo speakig girls of Nigeria traditionally rub the roots over sacrifictions to make body markings. Sap from fresh leaves of the plant is universally recognised as a remedy for parasitic skin diseases and for many eruptive and pustular skin affections, a property which gives rise to the European and to many African names for the plant. All forms of ring worm are effectively cured by the traditional use of the watery leaf extract of the plant. Furthermore, the leaves of this plant are strongly purgative. The dried leaf is used as an arbortifacient. On the other hand, it is used to expedite child birth!
Photos
The leaves of the "Senna alata" (the ring worm shrub) or (the craw craw shrub) on sale at the Agege Market in Lagos State