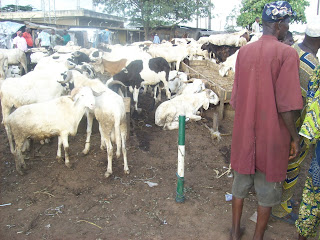 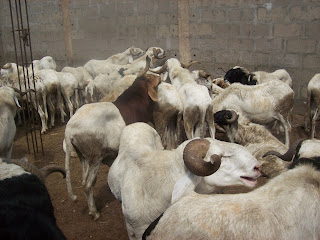 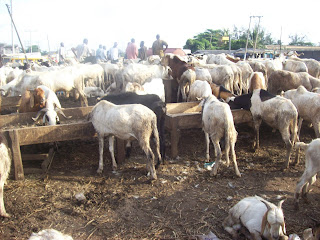 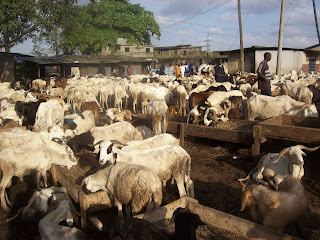 By S. Olanrewaju Disu
While criss crossing the length and breadth of the Lagos Metropolis, one frequently comes across "special" markets -i.e markets that usually sell only one commodity. An example of such a market is the rams' market, the largest of which is the "Alaba-Rago" Rams market situated along the Lagos Badagry Expressway in the Ojo Local Government Area of Lagos State. Another example is the Gbagada Rams market situated along the Apapa-Oshodi Expressway. We also have the "Nepa Rams Market situated along the Egbe Isolo Road in Ejigbo Local Council Development Area.
Rams are available in our rams' market all year round. During festivals such as yuletide and other religious festivals, there are large numbers of rams for sale at high prices: whereas during other periods opf the year, rams' prices are lower. Indeed the consumption of rams is often a pastime attached to several activities among which are the celebration of the arrival of new born children, opening of a new house, weddings, funreals, promotions e.t.c
In Lagos Metropolis area generally, rams' markets are located along highways and suburban road sides. This makes for easy evacuation of the animals after purchase. Motorists easily drive adjacently to the markets with little hinderance. Also, there are some pick up vans as well as taxi cabs readily available to help ram purchasers evacuate their purchases to their destinations in the metropolis.
Where are these rams from?They are reared in the Northern part of Nigeria, very far from Lagos climate as well as edaphic conditions prevailing in the north, in addition to very expanse of graze land, encourage the breeding of rams on a very large scale.
Full time rams' merchants purchase these animals in large quantities from ranches in the Northern parts of Nigeria and then transport them by long haulage vehicles directly to the boisterous "Alaba Rago Rams Market" in Lagos and also other big rams' markets in the metropolis on an almost daily basis. This has to be so as there are ready markets for them.
In order to counteract the almost non-availability of grazing land for these rams, merchants bringing them from the north often bring along roughages for their feeding e.g. grasses and fodder plants as well as fodder crops like groundnuts (dried stems of groundnut as well as the dried pods after the seeds have been removed from the pods)Other rams' diets include dried cowpea pods and guinea corns.
To make the story short, ram selling is a lucrative business in Lagos State Indeed.
Illustrations:
A. Rams on sale at the "Alaba rago Rams' Market"
B. Well fed bigger rams at an exclusive corner of the "Alaba Rago Market"
C. The "Gbagada Rams' Market"
D. The "Nepa Rams' Market" in Ejigbo, Lagos State