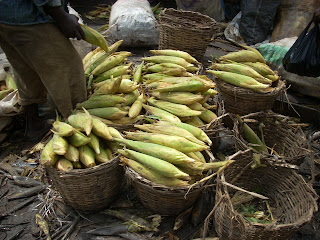 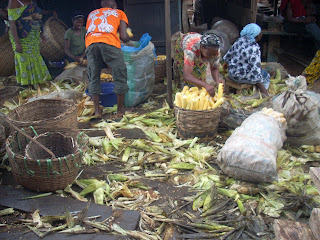 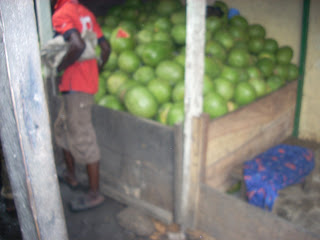 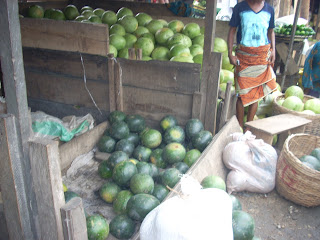 PECULIARITY OF THE MARKETS
It is pertinent to mention that there are some markets in the Lagos Area Metropolis that sell only one agricultural product. For example, the “Idi-Oro Market “sells only plantains, and perhaps corn when in season. Virtually all the southern part of Nigeria, i.e. the tropical rain-belt zone, produces plantains and bananas all-year round, and the “Idi-Oro Market” in Lagos receives and sells this product everyday. We also have markets that sell only yams. These are dotted all over the metropolis. Though yam is a seasonal crop, it is cultivated very extensively in the middle-belt area of the country. Hence, it is always available all-year round.
There are the rams’ markets. The biggest of these rams’ markets is the “Alaba Rago Market’’, situated along the Lagos – Badagry Expressway, on the outskirts of Lagos Metropolitan Area. The expansive land-mass with sub-tropical climate of the Northern parts of the country is extremely favourable to ruminant live-stock production, and there are ever-ready markets in Lagos for these animals.
We have the “Daleko Market’’ in Lagos that specializes in the sale of a popular cereal- i.e. rice and vegetable oils. These two items are available in the “Daleko Market’’ year-round, rain or shine, from dawn to dusk. There are always heavy vehicular and human traffic in and around the market every single minute of the day. Indeed, it is one of the busiest markets in the whole country.
There is the well-known snail-market in Lagos Island situated near the “Okesuna Municipal School’’ behind the “Abari Cemetry’’. Renewed interest in snail-farming in recent years has made snails to be in good supply at our markets. Assumed medicinal value of snails among our people make snail- selling a profitable venture in our markets.
We also have meat markets. These are markets that sell only beef and mutton. These types of markets are usually located adjacent to or not far from abattoirs. They operate six days a week – Sundays traditionally being rest days. Because of the large density of population in Lagos Metropolis, meat- markets are tremendously patronized. Indeed, our butchers, though not very educated, are people of comfortable means. That’s why some of them pass down the profession to their off-springs!
Finally, we have fish markets. Lagos, an island surrounded by water (the lagoon, the Atlantic Ocean, rivulets & creeks) has fish in abundance. These naturally must create peculiar markets that specialize in the selling of sea-foods. We have them at Apapa, Ijora ( Ibru Jetty ), Badagry and Epe.
Because of the huge population, fish and other sea-foods must be imported to compliment local production, which has dwindled because over-fishing and the depletion of fishing population due to several other factors- e.g. the pollution of sea-water from industrial wastes.
Alas, the importation of fish simply created another peculiar market- the frozen fish market!
Indeed, people who sell frozen fish do sell frozen chicken and turkey alongside them- all in the same cold room! Local poultry farmers always have ready markets available in these frozen fish markets.
Posted by S .O .DISU at 13:47