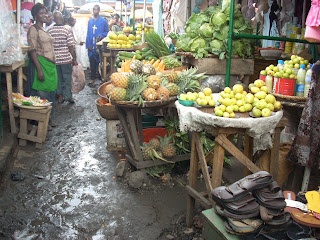 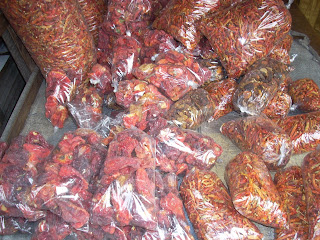 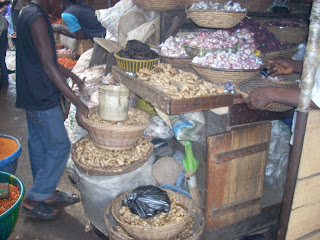 Agricultural products found in Lagos Metropolitan Area Markets can be grouped under the following:
A. CROPS
B. LIVESTOCK
C. PACKAGED ITEMS

A. CROPS:
A large variety of crops are found in markets in the Lagos metropolis. They can however be subdivided as follows:
(i) Fruits: Commonly found are citrus fruits: orange, tangerine, tangelo, grape fruits, lime, lemon as well as mangoes, bananas, plantain, pawpaw, pineapples, “asala” also called walnuts, “agbalumo” and “awin”. We also have the popular water melon, pears, apples, “igba” also called garden egg, water melon seeds also called “apon” or “ogbonno”
(ii) Vegetables: Vegetables, mostly green and leafy, abound in large varieties and quantities in Lagos markets. Because of their nutritional benefits (they are rich in vitamins and minerals).They are in high demand all year round, bitter leaf, “igbo”, “ugwu”, water-leaf, “soko”, and “tete” are readily available in Lagos markets. Also available are cabbage and lettuce.
Additionally, we also find fruit vegetables which include tomato, pepper (“atarodo” and “tatase”). These come in bright colours and are a delight to watch at the markets. Peppers also include “sombo” (both fresh and dried). Also to be found are okro, onion, cucumber and carrots – when in season.
(iii) Cereals: The demand for cereals in Lagos Metropolitan Area cannot be over-emphasized. Markets therefore stock them in very large quantities. Rice, a typical example of cereal, even has a market, the popular “Daleko” market that specializes in large scale rice selling. Other cereals that abound in Lagos markets are maize (or corn) which shall be treated specially in subsequent write-ups, guinea corn, millet and wheat.
(iv) Legumes: These legumes produce protein rich seeds which the populace cherishes. Typical examples are cowpea, groundnut and soyabeans. Large and very expansive farmlands in the northern parts of the country produce those legumes in large quantities. There has also been tremendous scientific improvement in the storage methods of the products. Therefore they are always available all year round in Lagos markets.
(v) Root and Tuber Crops: These sets of crops are the traditional staple food of most people who live in Lagos. They are yam, cassava, cocoyam, Irish potato and sweet potato. They are called root and tuber crops because they produce enlarged edible portions in roots as underground stems. One of them, cassava, is the basic raw material used in the preparation of “gari” and “fufu” as well as “lafun”, which the populace uses in complementing vegetable soups.
(vi) Spices: This is another category of crops found in Lagos area markets. They are ginger, powdered red pepper, vanilla, sugar and cinnamon, salt, though not a crop but mineral , adds taste to food. The same function is performed by “iru” (locust beans) – a psicethat is widely available in Lagos markets “iru” is a condiment which has gained popularity.
Natural spices come from bark, roots, leaves, stems, buds, seeds and aromatic plants. Since we are in the tropics year round, and plants that produce the above are plentiful. Spices herbs and vinegars that give different flavours to almost any food abound in Lagos markets.
B. LIVESTOCK
In addition to vegetables and other farm products, livestock forms very important agricultural items that are found in Lagos Metropolitan markets. These livestock can be broadly divided into:
(i) Poultry: Chicken, ducks, guinea fowl and turkeys. As usual, there are packets of markets that “specialize” in the sale of “live” chicken, duck and guinea fowl only, for example “Alasalatu street” market. In the larger general markets, for example, the Iyana - Ejigbo market, we have both live and frozen poultry. Some sellers even help buyers to kill and dress poultry for a fee.
(ii) Fish: Fresh fish, frozen fish, smoked fish and dried fish are readily available. In recent years, there has been tremendous interest in fish farming among the populace. Therefore, there is always daily supply of live fresh water fish in all the markets in the metropolis. These include crayfish, prawns, both fresh and smoked. The “Obun-Eko” market is popular for dried fish and crayfish.
(iii) Meat: Lagos Metropolitan Area markets get supplies of fresh meat abattoirs very early in the morning long before noon. This is because large numbers of cattle are slaughtered at the abattoirs that are scattered all over the metropolis. Additionally, we have “meat markets”usually located very adjacent to abattoirs or slaughter slabs.
(iv) Snails: These are also to be found in Lagos Area Markets. Renewed interest in snail farming in recent years has made snails to be in good supply at our markets. Assumed medicinal value of snails among the people make snail selling a very profitable venture in our markets
B. PACKAGED ITEMS
The third category of agricultural products to be found in Lagos Area Markets are packaged items : wheat flour, which is used for bread making, snacks and other pastry products. Flour mills are strategically sited at the vicinity of Apapa port ( a natural harbour) in Lagos. Large, ocean liners bring in wheat from the western hemisphere to these large scale flour milling industries at regular intervals; hence a large abundance of wheat flour flood some “specialized” markets noted for these – namely, the “Oke-Arin” market in Lagos Island, and the “Daleko” market in Lagos Mainland. These flours are packed in strong 50kg polyethylene sacks.
Packaged grains – i.e. rice and beans are also available in large quantities in the above-named main markets as well as in other sub-urban markets. They too come packaged in 50kg polyethylene sacks.
Vegetable oils, in tinned, beautifully labeled containers ranging from 2litres to 50litres sizes are also available in the above-named main markets as well as various supermarkets big and small in the metropolis. Palm kernel oil and the famous palm oil (products of our local industries) abound plentifully. The demand for them is insatiable.
Finally, we have tinned tomatoes and tinned tomato purees. All our markets, grocery stores, super and mini markets sell tinned tomatoes all year round. The are both imported as well as produced locally from our tomato packing industry
Posted by S .O .DISU at 05:10