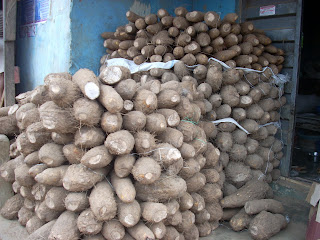 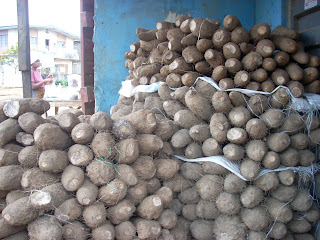 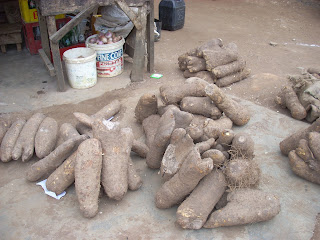 Yam.
Yam is a crop that produces tuber under the ground and provides carbohydrates,to humans when eaten.yam is the ediblestarch tuberons roots of various plants [genus dioscorea of the family dioscoreaceae] commonly used as a staple food in tropical areas.In the Lagos Metropolitan area,yam is widely used as a staple food by the huge populance.some merchants trade year-round in yams and yam-products.eg yam-flour.
There are two distinct planting dates for yam production.therefore,there are periods when yams are in large supply and sell cheaply.also,there are periods when yams are in short supply with consequential high price.

Early yam is planted between November and December, while late yam is planted between March and April.Yam matures in 8-12 months after planting.therefore,near yam appears in the market from the months of July and August.in the southern parts of Nigeria,yam is planted between November and December each year .hence.new yam appears first in the southern state long before the advent of new yams from the northern parts.Geographically, however ,the northern parts of the country has much more vast quantity of arable land for yam-farming on a very large scale.Hence late yams planted in the north can not be totally exhausted before the advent of new yams in the south to shore up supplies.

Altogether there are about five varieties of yam to be found in Lagos area markets, namely white yam [dioscorea routundata];water yam [dioscorea alata];aerial yam [dioscorea bulbifera];yellow yam [dioscorea cayenesis] as well as bitter yam [dioscorea domentorum].
The most popular varieties are the white yam and the water yam.the white yam [dioscorea rotundata] is by far the most popular and the most widespread in Lagos markets.this is chiefly because it is put into various uses by all and Sundry.we can mention six right-away ;
i. “Boiled-yam” which can be eaten with cooked beans and soups or with palm oil or scambled eggs ;
ii. “Pounded –yam” which is boiled-yam moulded in large,wooden mortar and pestle “ pounded yam” is eaten with vegetable soup and meat or fish;
iii. “Dundun” which is fried yam;
iv. “smoked-yam,” which is eaten with palm-oil or oily soup;
v. “Porridge”which is the delicacy of the elite and ;
vi. “yam-flour,”usually converted into “amala”.which is very popular among the inhabitants of Nigeria’s south-west.”amala” is eaten with vegetable soup .

Right now,new yam tubers are gradually flooding the markets in lagos metropolis. The prices are falling and everybody is buying and eating yam.
Posted by S .O .DISU at 03:33