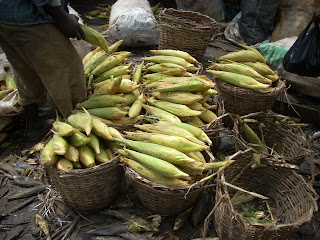 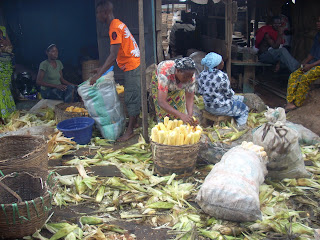 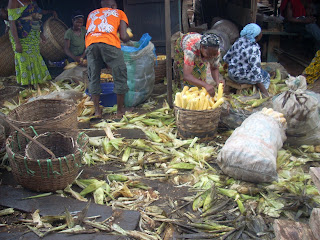 When in season,corn is found in every market, big or small, all over Lagos Metropolitan Area. The scientific name for corn [ or maize] is “ zea mays “. It is a cereal crop and is a member of the grass family.

In southern Nigeria, corn has two main planting periods—early corn being planted between March and April, i.e. at the on-set of the early rainy season; while late corn[ or maize ] is planted between July and August, to co-incide with the late rainy season. Corn can also be planted in other parts of Nigeria where irrigation is available. But the plantation of rain-fed corn produces delicious and sturdy products.

Very large quantities of corn are harvested green. These are immediately transported to large whole-sale markets in the Lagos Metropolis. To mention a few,we have the popular “Mile 12 Market”, the “Agege Market”, the “Okokomaiko Market”and the “Iyana-Iba Market”. Market women flood these markets from dawn to evening , buying freshly-harvested corn from both the hinterland and near-by farms. Ad-hoc corn sellers emerge every year during this harvest period. Transporters make brisk business during this period, too. Small, medium-size and large trucks are deployed in large numbers to evacuate corn from the entire southern states of Nigeria to Lagos State to feed a densely populated people who love eating corn in various forms. Corn is tasty and has a lot of nutritional value.

In addition to being eaten either boiled or roasted, corn is processed into corn flour , corn-flakes and livestock feeds. These processed corn products are sold in different urban markets— e.g. “ Oke- Arin Market “ and “ Daleko Market “, either on wholesale or retail basis.

In Lagos markets, we have both the yellow and white corn. Each variety is equally acceptable to the people because each serves a cultural need. For example, the white variety is used for special diets, namely, “ogi” – the local custard drink, “tuo”--- similar to mashed potatoes, and “adalu”—i.e. combination of two grains—corn and beans cooked together. Similarly, the yellow variety is used as above except for “tuo’’ and “eko”—which are usually made with white corn by some ethnic people in the populace. Both yellow and white corn are also used in feeding domestic poultry – a popular pastime among the middle-aged and retirees.

After harvesting fresh corn, a substantial quantity are left and harvested dry. These dried varieties are available in our markets all-year round. They also come as yellow-maize or white-maize. These dried corns serve the populace before the arrival of another planting season and harvest. There are livestock feed-mills in Lagos area, the largest of which is located at the Ikeja Industrial Estate. Therefore, corn is a very important agricultural product in Lagos State.

THE PHOTOGRAPHS ACCOMPANYING THIS ARTCLE SHOW SOME OF THE MANY FORMS IN WHICH CORN IS SOLD IN LAGOS MARKETS.
Posted by S .O .DISU at 10:48