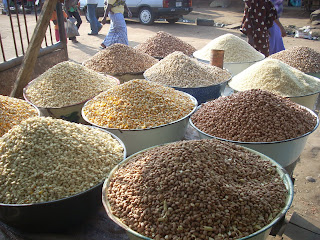 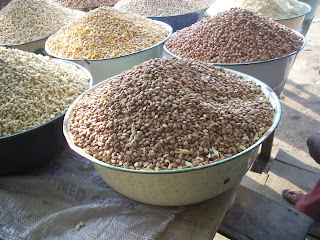 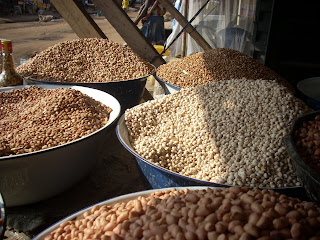 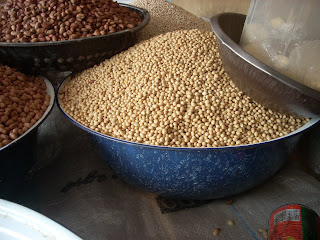 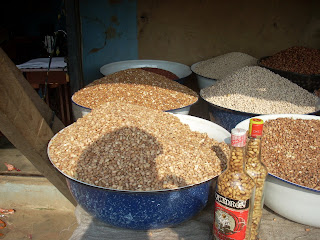 Bean [related to the cowpea ] is the seed of any of various erect or climbing leguminous plants. Matured beans are eaten by the populace because of its richness in protein. When immature, a bean pod is used as a vegetable.
Beans in Lagos markets come in different colours and shapes. We have beans in brown, light brown, white and coffee-brown colours. The sizes of coffee-brown beans are much smaller than the others. But there is demand for all of them.
Beans are found in Lagos Area Markets all-year round. Beans are planted in all parts of the country. Beans can be planted either manually (i.e. by traditional farming methods ) or mechanically on a large scale. Early planting occurs in April and late planting takes place in August and September in the south; while in the northern part of the country, planting occurs in July and August of each year. Matured beans are harvested three to four months after planting.
Years ago, beans are harvested traditionally and manually on a small scale . But nowadays, upsurge in population means many mouths to feed. Therefore, there is now a corresponding change in farming methods. Shellers are used on a large scale. There are now very large, mechanized and modern farms in the northern part of the country that produce very large quantities of beans. Storage of processed beans is now done in silos on a very large scale. Also, hermatic storage is done in air-tight containers. The beans are then transported to Lagos in jute bags, via long-haulage trailers.
The demand for beans in Lagos area is insatiable. This proteinaceous food item is usually eaten in various cooked forms.When cooked, it can be eaten with bread or rice , yam ,
Soup or cooked with corn. It is extremely popular with blue-collar workers and students.
Market-places in Lagos sell beans both whole-sale and retail. The traditional entry-point of the item into Lagos, i.e. the popular “ Mile 12 Market” , also sells beans on wholesale and retail basis.
There are traditional and beliefs embedded in beans-eating in south-west Nigeria (including Lagos State). The birth of twin – children is traditionally celebrated with cooking and eating of beans. Families into which twins are born periodically cook and eat,as well as share cooked beans with others- neighbours, extended families and friends.
At social functions, rice-based foods are usually complemented by a special delicacy called “moin-moin”. This special delicacy is made of 95% bean content. We also have fried bean-balls,used to complement “ogi” , the local custard drink. It is also eaten with bread.
On a smaller scale, soya-beans are also available in Lagos Area markets.Soya beans are usually used as supplements to infant-foods. Soyabeans are reputed to be very nutritious and extremely rich in proteins. However, soyabeans are not very popular on the people’s food tables because of its reputation of being very tough to cook!


*Photographs above are of beans and some other grains on retail markets in Lagos area.
Posted by S .O .DISU at 09:10