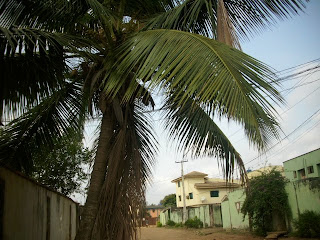 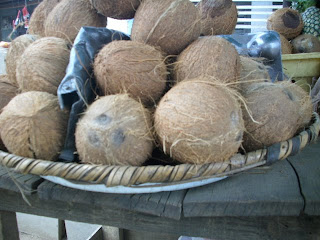 
The coconut is a unique agricultural product in Lagos State. It is the fruit of the coconut-palm whose outer fibrous husk yields “coir” and whose nut contains thick edible “meat” and coconut “milk”. The coconut palm is a tall pinnate-leaved tropical palm, knowm botanically as “Cocos nucifera”, and they are extensively available in Lagos State.
Coconuts are found in Lagos Metropolitan markets chiefly among market women who sell fruits. Traders who sell fresh vegetables hardly sell coconuts! Fresh vegetables are perishable items that must be sold within 24hrs of harvesting. But coconuts do not perish easily. They have hard “outer-coats” that help them have a long shelf-life. Hence, coconut can be purchased in our urban and sub-urban markets in Lagos all-year round.

The coconut palm is probably the best known palm in the “palmae” family.This tree has a tall simple stem that is seldom straight, and terminal crown of large fan-shaped leaves. The coconut fruits are found in bunches, as illustrated in picture{A}.
Coconuts are of immense commercial importance locally in Lagos State. The following are derived from this large nut :

(a) “coir” --- a stiff coarse fiber from the outer husk of the coconut. It is used to make rope and local foot-mats. Local craftsmen make a decent living out of this.

(b) “copra” --- dried coconut “meat” yielding coconut oil, which is used in soap-making, cooking and as fragnance in jelly making.

Coconut cakes and snacks as well as “tapioca” are popular by – products of the coconut fruits. Moreover, people use coconuts’ hard outer coats to make local bon-fire.

Finally, mention must be made of the “coconut milk”. It is reputed to be an excellent cleanser and a “natural anti-biotic.” In the case of a drug-overdose, people are advised locally to drink coconut-milk to neutralize the side-effects.

A---- Coconut-fruits on a coconut palm.