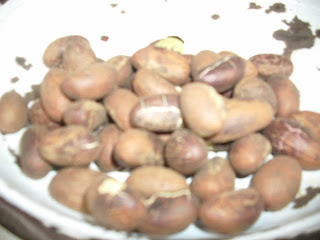 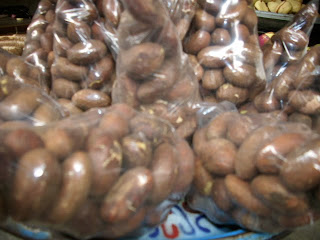 In Lagos Area Markets, bitter- kola is commonly called by its vernacular name, “Orogbo,” or “Orogbo kola-nut”( from the Yoruba name). The scientific name is “Garcina kola, Family Guttiferae”.

The bitter-kola is found in some Lagos Area Markets all-year round, though in relatively limited quantities compared with other farm products. Because of its bitter taste, not many inhabitants of the State patronize or sell it.
Bitter-kola is usually found cultivated around villages in Southern Nigeria, often in wet situations- i.e. in riverine and swampy areas e.g. the Badagry Area of Lagos State. Ironically, the seeds are traded well beyond the area where they are cultivated. Bitter-kola is used as masticatory, having a bitter, astringent and resinous taste. This is followed by a lingering pepperiness.The bitter-kola is also used to enhance the flavor of local liquor.
Usually, the bitter-kola is eaten raw and not in prepared food. Despite its bitterness, it has some medicinal attributes – mastication will relieve coughs, hoarseness, and bronchial and throat troubles. Bitter-kola is taken dry as a remedy for dysentery and is said to provide an antidote against strophantus poisoning. The bitter-kola is also known to be vermifugal.
In spite of all these medicinal attributes of the bitter-kola, our “orogbo” in local parlance, many residents of Lagos do not patronize it because of its bitter taste! The main market where it is sold on whole-sale and retail basis is the popular “Mushin Market” in Lagos State.

B--- Bitter-kola on sale at the “Mushin Market” in Lagos State.