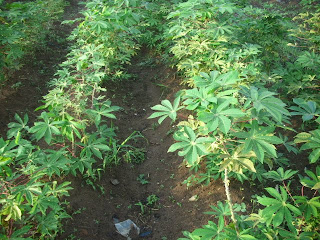 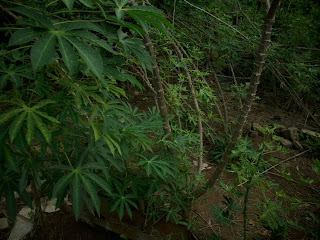 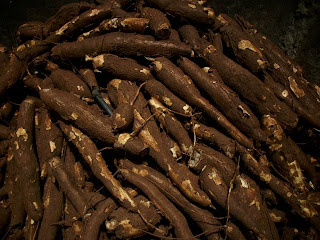 The cassava, which, like yam, is a root-crop, serves diverse purposes of being a crop that is sometimes cooked for food by man, prepared as meal for some livestock, serves as raw-material for industry, and in Lagos Area, indeed in all of tropical West Africa, it is the main ingredient used in making our most common staple foods, e.g. the farinaceous meals called “fufu”, “gari”, etc. which are eaten by the overwhelming majority of the people.
Ironically, cassava is not sold in every market! The tubers are sold in few markets scattered far apart in the metropolis. However, food items – e.g. “gari”, “fufu”, cassava-flour, tapioca, etc., which are products of processed cassava, are usually available in every market in Lagos Area.
Cassava is scientifically known as “Manihot esculenta, Family Euphorbiaceae”. The cassava plant is a shrub that can grow up to 4m high. It’s stem is interestingly articulated and has large, fleshy to woody tubers.
Historically, the cassava is a native of Brazil. The plant became established firmly in West Africa by returning slaves from the America’s in the 19th century. Nowadays, cassava is dispersed throughout the tropical world.
The importance of cassava and its bye-products cannot be over-emphasized. Farmers, both big and small, agricultural workers, and land-owners, too, take smart advantage of the fact that cassava can grow in relatively poor soil and low rainfall areas. Also, cassava can be propagated by stem cuttings. Above all, cassava can be planted from March to September each year, while its maturity period is between 8 and 15 months, depending on the variety. Therefore, cassava planting and harvesting is done for most parts of the year – thereby providing farinaceous staples for all of us all-year round, barring occasional adverse weather conditions.
A typical product made from cassava is worth mentioning: i.e. the “gari”. The “gari” is a coarse dry – ground cassava flour. It can be made into “eba”, i.e. a pudding made with boiling water. Characteristically, “gari” swells to 3 – 4 times its volume when water is added. This contributes to its popularity as a food, giving a feeling of being replete.
However, cassava is nutritionally low in protein content, as well as deficient in vitamins. But its starch content has some calorific value . Furthermore, cassava is rich in carbohydrates; this carbohydrate is in a gelatinous form, making it easily digestible.
Industrially, starch is produced from cassava. Starch is a very important industrial raw-material. Starch is used in the manufacture of food-stuffs, textiles, paper-products, plywood, adhesives, glucose, etc. Dried cassava roots and peelings provide good food for domestic ruminants, namely, sheep, rams, and goats. Mention must be made of the fact that starch is the standard material in laundering linen and cloth to confer stiffness, and , after ironing, a smooth appearance!


Photo Illustrations:
1. A cassava farm with young cassava plants.
2. Matured cassava plants, ready for harvesting in a farm in Lagos State.
3. Harvested cassava tubers on sale at the popular “Ola Market” in Itire Area of Lagos Metropolis.
Posted by S .O .DISU at 06:50