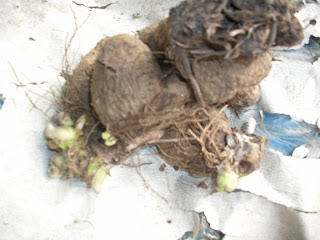 “ Esuru” or cluster yam, comes in yellow, white or pale-yellow forms. It is called a cluster yam when its tubers are bunched. It is also known as a three-leaved yam or a trifoliate yam. Botanically, it’s known as “Dioscorea dumetorum, Family Dioscoreaceae”.
Traditionally, “esuru” or the bitter yam, is eaten with the palm-oil. Nowadays, however some enlightened citizens eat it with scrambled eggs, margarine or butter. Its appearance in markets is seasonal.

The bitter-yam is often grown in hedgerows around a farm and especially on the edges of yam fields – as a deterrent to human and animal marauders. The Yoruba’s evoke the plant in a sinister incantation to bestow virile power.
In the olden days, “esuru”, the bitter yam, is purposely grown at sparse points in farms as insurance against drought or low yield of the traditional (common) yams. Nowadays, however, massive production of improved variety of yams all over the country has counteracted the situation.