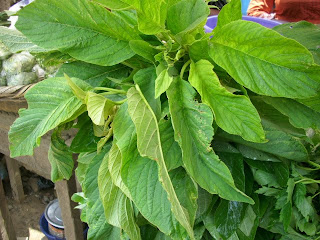 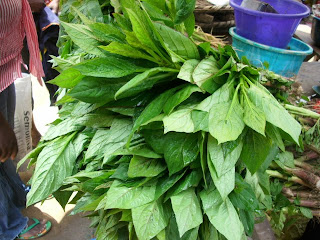 
This vegetable is a perenial herb. It is available in Lagos area markets all year round. As expected, it is in great abundance during the rainy season. The "African Spinach" is called in vernacular "efo tete" and its botanically called "Amaranthus hybridus, Family Amaranthaceae". Historically, it is said to reach West Africa from Asia and now it is found in all parts of tropical Africa but it is rare in the savannah regions
The vegetable and indeed the whole of the plant is eaten and when cooked with condiments (plus meat or dried fish) produces the best of amaranth spinachs.
In our markets, this vegetable is mostly found in the form of a green, very leafy plant that is duretic and high in mineral content. It is rich in dietic requirements. Culturally, its dietic valueis recognised by the Yoruba speaking members of the State in an incantation to obtain money!It is used as a tape worm expellant and to relieve pulmonary problems.
Photo's The African Spinach "Efo Tete" Vegetable at the "Idimu" & "Agege" Markets
Posted by S .O .DISU at 07:50