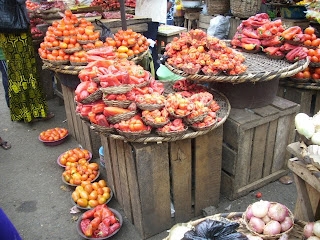 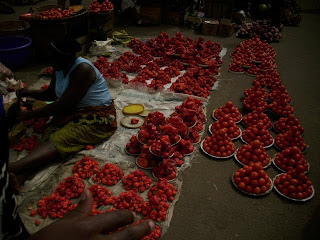 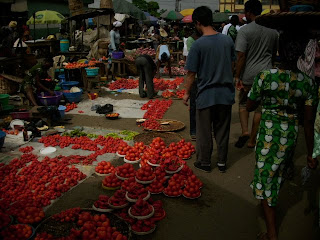 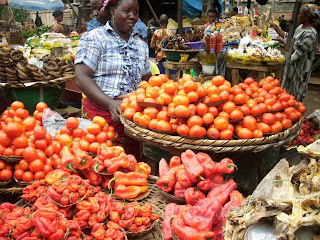 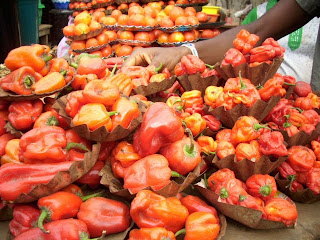 
A typical Lagos Area Metropolitan Market is inundated with peppers every day : week-days, week-ends and public holidays, too! Very colorful, usually bright red and sometimes green or yellow in color, peppers give us a picturesque scene indeed.


Peppers sold in our markets in Lagos are usually farm-fresh. In addition, however, we have dried pepper, which usually comes in handy when pepper is not in season and its price is high, as well as ground pepper in powder form.


Botanically, they are classified as “Capsicum annum, Family Solanaceae”. Our peppers come in varieties : we have sweet pepper, chilli pepper, bird’s eye pepper as well as green pepper.


The peppers in our markets are put to various uses. The average Lagosian has a pepper-pot at home: this pepper-pot usually contains a stew of vegetables, meat or fish and a variety of local condiments. Indeed, peppers add flavours to our stew and soup. Peppers are rich in vitamins and minerals.


Pepper-planting is done on a very large scale in the northern part of the country. Land preparation is done mechanically by ploughing, harrowing and ridging. Edaphic and climatic situations in the north coupled with the availability of extensive land mass, favor pepper cultivation. Huge harvests of fresh pepper are always transported down south to Lagos in long haulage trucks known locally as “trailers”. As usual, they find their way into Lagos through the “Mile 12 Market”. Unless there are industrial disputes and strikes by truck-drivers, peppers are always driven into Lagos on a continuos daily basis. Periods of drought or other natural disasters are counteracted by large-scale irrigation of highly mechanized farms in the northern States of Nigeria.


Hotel and catering services benefit a lot from the ready availability of peppers in our markets. This enhances their food productions, which is largely dependent on peppers. The same thing applies to fast-food establishments and other eateries that serve the teeming population.


Photo’s : Colorful display of peppers at the “Ogba Main Market”, “the Ogba Sunday Market”, and “the Bariga Market”, all in our Lagos State.
Posted by S .O .DISU at 07:46