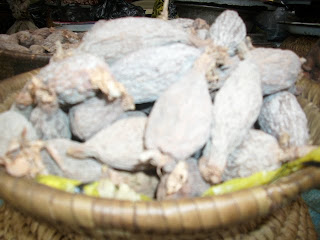 
Though our markets in Lagos State in general are stocked with numerous agricultural products which we consume as food – i.e. fresh fruits and vegetables, fresh and dried fish, meat and live-stock – we also have agricultural products that are purely medicinal, at least in our local content. One of such is the “alligator pepper” or in local parlance, “ataare”.
Scientifically known as “Afromomium meleguata”, the “alligator pepper” belongs to the family “Zingiberaceae”, the ginger family. Peculiarly, the seeds of the fruit are encapsulated in a pod.
The “alligator pepper” is a very important herb in Yorubaland, whose people are the dominant ethnic group in Lagos State. It is used for diverse traditional activities. For example, it is a traditional wedding gift – i.e. it is included in dowry requirements when taking a new bride. It is also used as a curative for gun-shot wounds and tooth –ache.
During traditional naming ceremonies of new- born babies, alligator pepper is used while offering prayers. After the mandated period of apprenticeship, artisans must present alligator peppers, among other things, for special prayers during their “freedom” or graduation ceremonies.
The leaves of the “afromomium meleguata” are locally used to cure malaria fever. The chewing and swallowing of the seeds are also used to ameliorate the state of drunkenness. Furthermore, our local people swallow the seeds before embarking on travelling as a protection against accidents – whether road, water or air accidents – and it works!